Something in the air at the Grammys, first of all, Adele won five Grammys which includes, an album of the year, song of the year, record of the year, pop vocal album, and pop solo performance.  While Beyonce won for Best Urban Contemporary Album and Best Music Video for her song Formation, which was taken from the album Lemonade.

Other winners of the show that weren’t broadcast, because music is a huge category and the show is only 3 hours and some minutes long. They were announced early during the broadcast. If they have broadcast the whole event it would be either 5 to 6 hours and the expectance speech will be longer and boring too. Bathroom break! Or even better a nap break!

Carol Brunette she won for Best Spoken Word Album: Carol Burnett, In Such Good Company: Eleven Years Of Laughter, Mayhem and Fun in the Sandbox. Previous winner was Obama.

This is strange, The Flintstone won for Best Arrangement, Instruments and Vocals: Jacob Collier.  Watch it below.

I know what you doing now is humming to the theme song of the Flintstone in your office.

And for Comedy Album Patton Oswalt, he visited Seth Myers a couple of weeks ago to talk about her comedy album, and he is hysterically funny to watch.

Did you know during the commercial break, they were showing highlights of previous winners of the past for the audience members? Highlights included Beyoncé and Prince covering “Purple Rain” in 2004; Elton John singing “Stan” with Eminem in 2001, and Taylor Swift and Miley Cyrus duetting on “Fifteen” back in 2009, that was interesting. I hope they do the same thing for the Oscars in 2017, show old movie clips from the past or even better the complete longer version of the people who died within the year and added the lasted person who died in the recent hours. 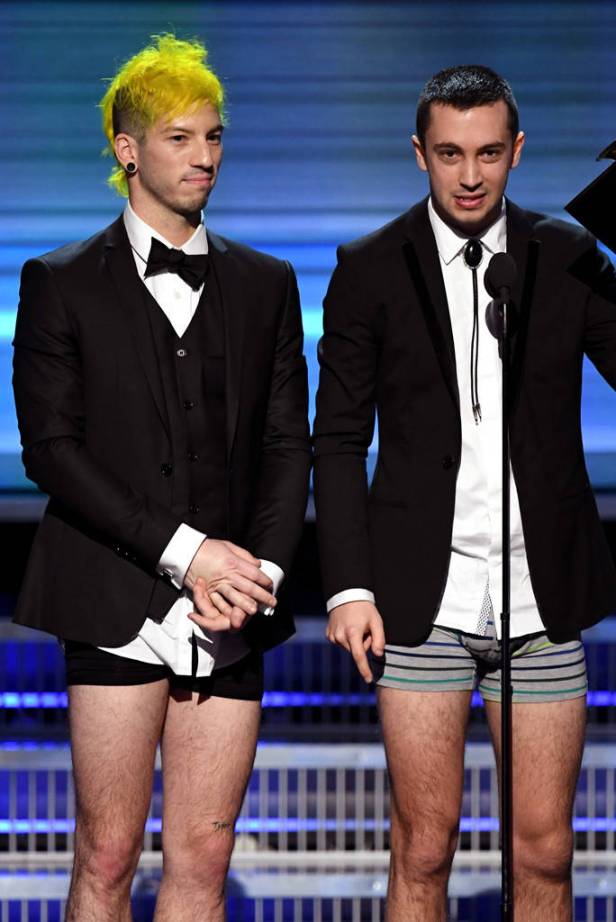 After winning the award for Best Pop Duo/Group Performance for their hit song “Stressed Out,” Twenty One Pilots members Tyler Joseph and Josh Dun immediately got up and removed their pants, choosing to walk up to the podium in their underwear.

Of course, you can remove your pants when watching the Grammys in your home.  We can’t see you, but at the Grammys, everyone can see you, that would be embarrassing. Feel free to do anything at home. But don’t do it in the office or workplace, they are rules.

James Corden followed it up by stripping down to his underwear to introduce Ed Sheeran.

Keep your pants on.

Before the show start, the executive producer told, if you win let your voices heard or stick what you wanted to say. They only have either one minute or a minute and forty-five second. As long they keep it short and to the point. And always thank the people who helped them to further their career.

And the winners are:  Winners