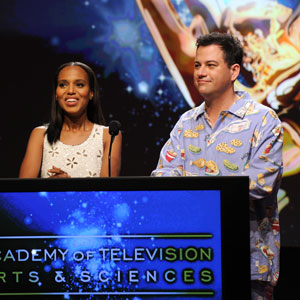 If you have gotten up pretty early to watch the Emmy nominations on TV, this morning and see Jimmy Kimmel in pajamas they always have the announcements very early in the morning. I am still asleep at eight in the morning, and I usually get up by nine in the morning. If it is eight here on the eastern coast America, it will be five in the morning in California.

Anyway, the 64th Primetime Emmy Awards were announced this morning, while I was drinking my coffee in my bath robe. It’s a long list.

Kerry Washington of “Scandal” and Jimmy Kimmel, in pajamas, who is hosting the Emmy this year on ABC in September 23, 2012.

My favorites were nominated, and they were “Good Luck Charlie” and “Wizards of Waverly Place” on the Disney Channel.  The list includes many of last year’s nominees, including “Mad Men,” which has taken the drama series Emmy for four consecutive years, and “Modern Family,” which has won twice for comedy series. Very funny show and I am watching the reruns during the summer time.

New to the ballot are “Veep,” “Girls” and “New Girl” actress Zooey Deschanel. “Girls” on HBO wasn’t that funny at all, and the story wasn’t that great as a reality picture it, but I hope the “New Girl’” Zooey Deschanel wins an Emmy for performance. She deserved it.

Here are the nominees:

COMEDY ACTOR
Jim Parsons as Sheldon Cooper in “The Big Bang Theory” |
Larry David as Himself in “Curb Your Enthusiasm”
Don Cheadle as Marty Kaan in “House of Lies” |
Louis C.K. as Louie in “Louie”
Alec Baldwin as Jack Donaghy in “30 Rock” |
Jon Cryer as Alan Harper in “Two and a Half Men”

Idris Elba as John Luther in “Luther”
Benedict Cumberbatch as Sherlock Holmes in “Sherlock: A Scandal in Belgravia”

HOST FOR A REALITY OR REALITY-COMPETITION PROGRAM
Phil Keoghan, “The Amazing Race”
Ryan Seacrest, “American Idol”
Betty White, “Betty White’s Off Their Rockers”
Tom Bergeron, “Dancing With the Stars”
Cat Deeley, “So You Think You Can Dance”

CHILDREN’S NONFICTION, REALITY OR REALITY-COMPETITION PROGRAM
“It Gets Better” (MTV)
“Sesame Street: Growing Hope Against Hunger” (PBS)
“The Weight of the Nation for Kids: The Great Cafeteria Takeover” (HBO)

GUEST ACTOR IN A COMEDY SERIES
Michael J. Fox as Himself in “Curb Your Enthusiasm”
Greg Kinnear as Tad in “Modern Family”
Bobby Cannavale as Dr. Mike Cruz in “Nurse Jackie”
Jimmy Fallon, host in “Saturday Night Live”
Will Arnett as Devon Banks in “30 Rock”
Jon Hamm as Abner and David Brinkley in “30 Rock”