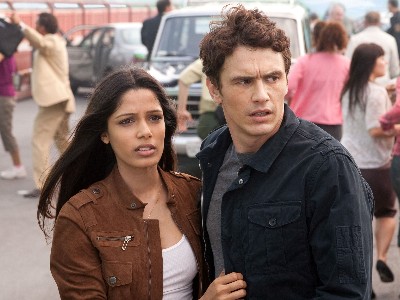 Can “Rise of the Planet of the Apes” out sold the number of tickets such as “Transformers: The Dark of the Moon” which made millions in the box office despite bad reviews and still people went out and saw it? People don’t care about the reviews. People wanted to see a good action movie and something different.

The CGI of the apes was so believable it came out to me and startle me. My popcorn bucket and my popcorn flew up in the air, and the bucket landed on top of my girlfriend. It had butter too. And it had hot sauce. And it had pickle juice. It tasted great so did my date too.

James Franco graduated from Palo Alto High School in 1996 and went on to attend UCLA majored in English, to overcome his shyness. He got into acting while studying there, which much to his parent’s dismay. He left after one year. Fifteen months of intensive study at Robert Carnegie’s Playhouse West, James began actively pursuing his dream of finding work as an actor in Hollywood. In that short time, he landed himself a starring role on “Freaks and Geeks” (1999) and he started to get in movies.  It wasn’t until the TNT made-for-television movie, James Dean (2001) (TV) that James rose to fan-magazine fame and got to show off his talent. Since then, he has been working non-stop. After losing the lead role to Tobey Maguire, James settled for the part of “Harry Osborne,” Spider-Man’s best friend in the summer 2002 major hit Spider-Man (2002). He returned to the Osborne role for the next two films in the trilogy. His best performance was in “127 hours” in which he was nominated for an Oscar. 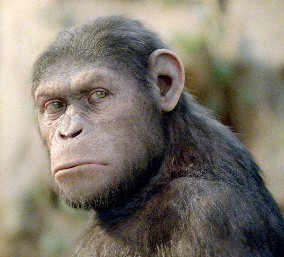 His father was a doctor in Iraq. His mother taught handicapped children. In 1985, Serkis began his professional acting career at the Duke’s Playhouse in Lancaster, where he was given an Equity card and performed in fourteen plays one after another. In 1989, he appeared in a stage production of Shakespeare’s ‘Macbeth’, so beginning his long association with the Royal Exchange Theater, Manchester, where he would return many times to appear in ‘She Stoops to Conquer’. 1990s Serkis began to make his mark on the London stage, appearing at the Royal Court Theatre as the Fool in ‘King Lear’, making his interpretation of the Fool as the woman who Lear, a widower, could relate to – a man, in drag, as a Victorian musician. In 1987, Serkis made his debut on television, and he acted in several major British TV miniseries throughout the 1990s.

In 1999, Andy Serkis landed the prize role of Gollum in Peter Jackson’s epic film trilogy based on J.R.R. Tolkien’s saga ‘The Lord of the Rings.’ He spent four years on the part and received awards and nominations for his performance as Gollum. A computer generated character in The Lord of the Rings: The Return of the King (2003) which won 11 Oscars. Gollum was the collaborative team’s effort around Serkis’s work in performance capture – an art form based on CGI-assisted acting.

He then work in King Kong (2005) which won him a Toronto Film Critics Association Award (2005) for his unprecedented work helping to realize the main character in King Kong, and a Visual Effects Society Award (2006) for Outstanding Animated Character in a Live Action Motion Picture.

Serkis continued with traditional acting in several leading and supporting roles, such as his appearances as Richard Kneeland opposite Jennifer Garner in 13 Going on 30 (2004). He was doing the thriller dance with Jennifer Garner and he was a good dancer.

Freida’s parents are from Mangalore, a coastal town in southernIndia. Her father is a banker, while her mother is the principal of a High School. Her sister, Sharon, is a producer with the Indian news channel, NDTV.  She was trained in some forms of Indian classical dance as well as Salsa. She auditioned for the part of Bond Girl Camille in Quantum of Solace (2008), but lost out the role to Olga Kurylenko. She was in a relationship with Dev Patel, having met on the set of Slumdog Millionaire (2008). Since her acting was not going that strong, she decided to go with her back-up plan, which was Interior Design. It is always nice to have a back-up plan in Hollywood. Then suddenly she got the lead role in the movie “Rise of the Planet of The Apes” for Freida she was ecstatic her acting career is back in swing. She was considered to replace Emma Stone in Sucker Punch (2011), but lost out to Jamie Chung.

The movie starts out in a strong as we meet genetic researcher James Franco, who is experimenting with a drug that may help victims of Alzheimer’s Disease—like his own father, nicely played by John Lithgow. So if we inject Alzheimer’s hormone into animals it can help the apes become smarter and stronger. So if we inject Alzheimer’s hormone into older people will they make them smarter, stronger and live longer? Ultimately, Franco rescues a baby chimpanzee from the lab and raises it as a member of his family, but veterinarian Freida Pinto warns him that Caesar won’t be a playful young chimp very long. This is an eventuality Franco isn’t willing to face, but moviegoers will immediately recognize as – foreshadowing of dark events to come. In other words, the movie was great to watch.

I give this movie 3 bananas out of 4.