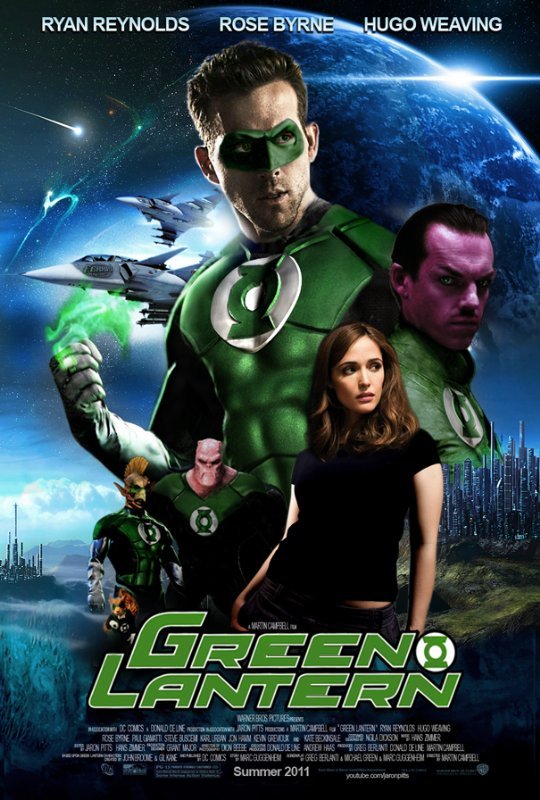 If you are a sifi and a comic book fan, then Green Lantern is your thing, this movie packs a punch of CGI in this film, it is no comparison to the other sifi fans out there.

Ryan Reynolds, plays Hal and Green Latern, the disguise is obvious, we can tell he is the Green Lantern. His love interest is Blake lively plays Carol Ferris. She plays an army pilot and so does Hal. The plot is a talented yet arrogant test pilot, is the chosen recipient of a mysterious green ring that grants him both superhuman powers and entry into an elite corps of intergalactic warriors. This group is charged with saving the universe from the evil Parallax.

Blake Lively stars in hit CW TV series in “Gossip Girl.” Her big break was the role of Bridget in The Sisterhood of the Traveling Pants (2005). For the Green Lantern, she was not given the part of Carol Ferris. She had to audition for the part. The other actress who auditions for the role was Jennifer Garner, if she had audition, for Wonder Woman it will be great for her and her career. When would “Wonder Woman” come to the big screen or small screen, we will never know?  We need some female superhero roles. Blake has a half-sister by the name of Robin Lively, who appeared on “Doogie Howser, M.D.” and “Teen Witch.” Blake was the class president at Burbank High.  She sang in her high school choir and born in Tarzana,California.  Blake has been sighted with Leonardo DiCaprio.  She was ranked the most beautiful women in Maxim Magazine in 2008 and 2010.

Ryan Reynolds began is acting in  1991-93, Ryan appeared in “Fifteen” (1990) (aka “Fifteen”). A Nickleodeon series taped inFloridawith many other Canadian actors. After the series ended, he returned toVancouverwhere he played in a series of forgettable TV movies. He did small roles in Glenn Close’s Serving in Silence: The Margarethe Cammermeyer Story(1995) (TV) and CBS’s update of In Cold Blood (1996) (TV). However, his run of luck had led him to decide to quit acting. In 1997, he landed the role of Berg in “Two Guys, a Girl and a Pizza Place” (1998). On an episode of “The Outer Limits” (1995). He played a ghost trapped in a haunted house. Ironically, in The Amityville Horror (2005), he played a living man trapped in a haunted house. He was offered the role of “Xander” in “Buffy the Vampire Slayer” (1997).

Since he had to do a lot of flying in The Green Lantern he had a fear of flying since he once went skydiving and parachute failed to open at the first attempt. He landed in the Ocean and got rescued.

The movie is not that bad, since The Green Lantern is playing in a theater near you, it’s worth seeing this movie. If people say it’s a bad movie, they haven’t seen it, or either they walked out in the middle of the movie and expected something else. It is a good movie if you are a sifi and comic book fan, if not, the hotdog wiener wasn’t on the menu. I was hungry.

5 thoughts on “Green Lantern off with a flying start”