What do you call a mummy with one foot that is walking across the floor? One footed mummy!

Ripley’s Believe it or Not, Hollywood, California is the most haunted location. The crew from the Ghost Adventures from the Travel Channel investigated the place, and it was the scariest place they have ever investigated. They have shrunken heads, body parts, and sinister histories. If the tour guide told you not to touch anything, don’t touch anything. Spirits can follow you. 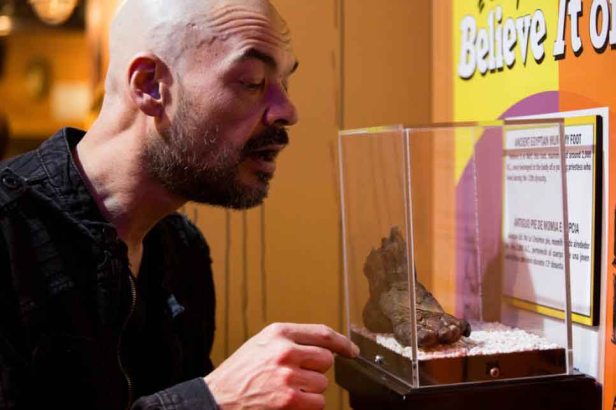 This foot is 2,000 years old, and it belongs to a mummy. When Zac was holding it in his hand during a lockdown procedure investigation, he describes that the foot was heavy. And by using a spectrum camera that can see ghost or entities, they picked up a skeleton spirit that was attached to the foot and another one beside him. It looked like one was trying to kick Zac to the floor. While he was holding it, it looks like he had a vision of woman pharaoh and the foot belong to her. Wow, Tom Cruise movie the Mummy was true after all. There’s evil in the museum.

Aaron was infected by the skull that was tuck away in a cave-like structure in the walls. He opened the box and there it was, a skull was in the box, and it was preserved for many years. In cold and damp location where it won’t deteriorate.  It made Aaron dizzy, and he was confused about where he was going. Plus, the structures of the cave can be very claustrophobia.

They have a Tribal Room, in it, it’s the most impressive room and be warned. They have the West Africa Nail Fetish Voodoo Doll and other real skulls that possessed evil in the place. Ripley had collected them during his visit to Africa in the 1920’s. (sorry no pictures) You have been warned!

Below the museum where the employees work or where they take a break, it’s the haunted area. The employees have seen and heard apparitions.

The museum is interactive; you can play Grab the Ruby, Roll your Tongue in front of the mirror, and other fun stuff.

Get the Complete Set of Ghost Adventures on DVD Right Here

2 thoughts on “Ripley’s Believe It or Not – Haunted Hollywood”