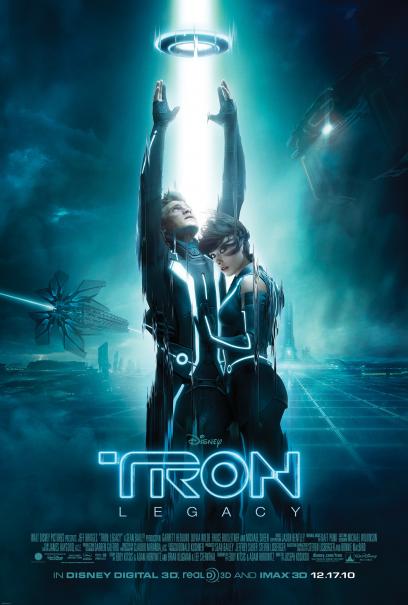 TRON the legacy is the sequel to the original TRON from 1982 almost 28 years ago. The story is, the son of a virtual world designer goes looking for his father and ends up inside the digital world that his father designed. He meets his father’s creation turned bad and a unique ally who was born inside the digital domain of The Grid.

The outfits are cool,  I wondered if anyone would wear this in the real world, wear spandex with lights on it, especially in the dark and have glow in the dark outfits.

If you haven’t seen it, it’s really good. It is much better to see it in 3D real time. The action comes at you. I watched it and I like it.  When I put the Real 3D glasses on, the screen comes towards you and the actions comes towards you. I was surprised when the actions came  towards me.  The action was so real that I splash my drink to a person behind me. Luckily, I was sitting next to another person who had a drink that was half way down to his cup. I pointed to a guy who was sitting next to me that he did it. The guy behind me punched him out and he was out. So 3D is real.  So I moved away to another seat.

There were more surprises in the movie and I launch my bag of popcorn up in the air, the worst part, it had butter in it and half the audience was covered in butter.

So, if you haven’t seen TRON the legacy go see it in Real 3D. I won’t be there because I already seen it. It’s good.