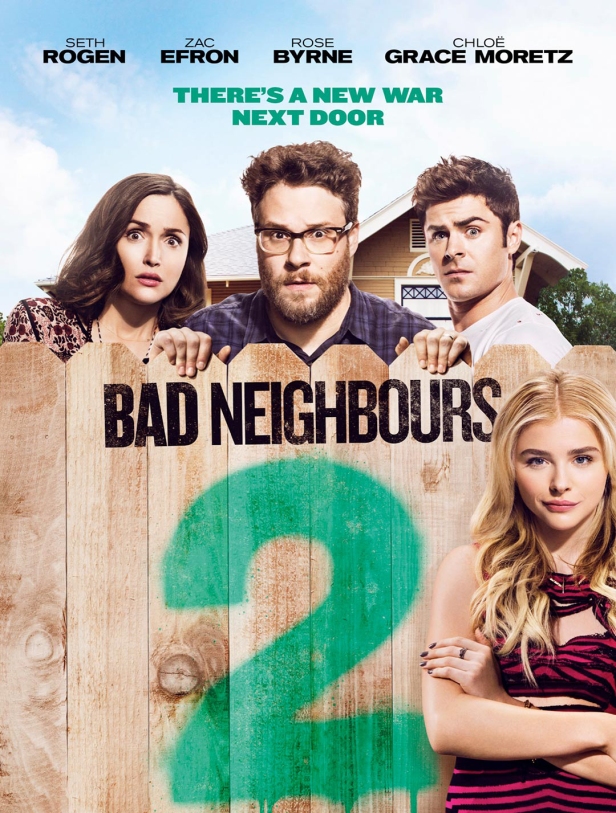 Mac (Seth Rogen) and Kelly Radner (Rose Byrne) are expecting their second child and preparing to sell their old house, which is subjected to a 30-day escrow. However, a newly established hard-partying sorority, Kappa Nu, led by Shelby (Chloë Grace Moretz), has moved into their neighboring house. To prevent the buyers pulling out, Mac and Kelly are soon forced to reunite with Teddy (Zac Efron) to help battle the sorority sisters.

In other words, it’s hilarious, raunchy and hilarious. Do you remember your college sorority or frat parties? Back in your days? Probably back in the 1970’s, 1980’s and 1990’s? The classics were Animal House (1978) and Revenge of the Nerds (1984). I saw the last one recently, because back in my days. I was teenager and I wasn’t allowed to watch it. It was rated “R.” And I was a teenager in the 1980’s. I don’t know if universities are still doing this since a lot of students are getting trouble and getting suspended for bad behavior.

For me, I am glad I am not a party person. It will ruin anyone life.  Now with technology and cell phone, anyone can be seriously suspended or expel from a university and ruin their career. So don’t party too hard.  Don’t post embarrassing pictures on Facebook, it can ruin your life and career.  Just study hard and you can meet your soul mate.

Now, in today’s universities sororities and fraternities, they cannot throw any parties on campus with drug and alcohol involve. It’s against the university rules and polices.

My thought of the movie, it’s hilarious. Zac Efron, Seth Rogen, and Rose Byrne are a comedy team.  The other actors are Chloë Grace Moretz, Kiersey Clemons, Selena Gomez and Beanie Feldstein, they were hilarious too.

One thought on “Neighbors 2: Sorority Rising”