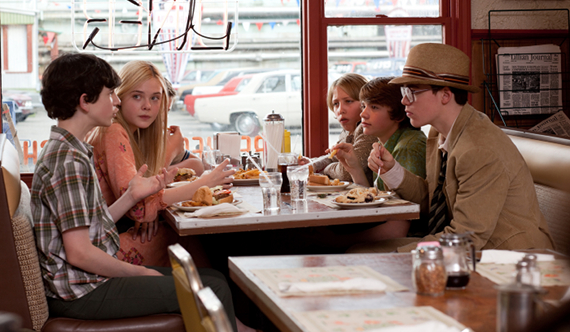 Super 8, a group of teenagers Cary, a pyro, Martin, a worry-wort, and Preston,  a goody-two-shoes) decided to sneak away to film a pivotal scene out by the train station. Charles, bossy and the camera guy and director of the movie he was making with the Super 8 camera. The boys are joined by a girl Alice Dainard (Elle Fanning), a skilled actress who happens to be the rebellious daughter of the town drunk…and Joe’s secret crush. It was the year of 1979 in Weirton, West Virginia (the actually location where the film was shot, not a Hollywood set, well sorta). Other cast mates are Amanda Michalka (AJ Michalka)  from the CW hit “Hellcats” and Jessica Tuck from High School Musical. She played Sharpay’s mom. If you are fan of their work, there are in the movie.

The story of the movie is a group of friends decides to make a Zombie movie on their Super 8 camera, while they were making the movie unexplained events happened to them, and it was an epic. You won’t be disappointed.

The new actors were great in their performances, especially doing their action sequences. They got to do their own stunts, but no one was hurt doing the making of the film. Elle Fanning the sister of Dakota Fanning, her big debut in a major blockbuster movie was absolutely fantastic in the movie. She get’s to drive in the movie, and she was wearing a seatbelt. So does the lead actor too. Driving debuts.

The movie was excited. You will jump out of your seat during the action sequences, even my popcorn flew out of my bag a couple of times and landed on my date.  She was all buttery and tasteful. She looked angry in butter, but good. But when the lights came on, she wasn’t there – Dang it!

The ending of the movie was better than the beginning of the movie. It is worth watching. At the end of the movie there’s the finish movie that the kids were making. It’s worth seeing the movie and the ending too. If you missed it catch on DVD when it comes out in the fall.

One thought on “Super 8: The ending of the movie is better than the beginning”