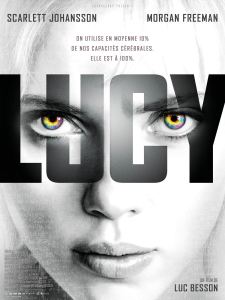 If you haven’t seen Lucy with Scarlett Johansson and Morgan Freeman, then you missed it. It’s a great action thriller.

Luc Benson, the director was intrigued by the brain capacity of Lucy, a female Australopithecus afarensis, stating that her brain size was only 400g, and modern human brains weigh in around 1.4 kg. “I was very interested with all the science,” he said. “When I learned one cell can send 1000 messages per cell per second and we have 100 billion cells in our body, for me, it’s gigantic.” He did not want to make “a documentary about the brain,” and so he focused on making an entertaining film with scientific and ethical aspects, which he cited as “quite rare today.” He said, “That was my goal: an action film with a purpose. When I was younger, the purpose I had was smaller. Basically, this is about us, our legacy and what we learn.”‘ A computer-animated version of Lucy Australopithecus, but live action in film,” modeled on the dawn of Man sequence from 2001: A Space Odyssey,” is one of several of Lucy’s homages.

So please either Rent or Buy the Blue Ray Version of the movie and watch the extra features and the interviews of the scientist and research of the human brain. And what it can do for us. The movie itself is fascinating,  suspenseful, very graphic violence  scenes, and the language is modern. It has subtitles but it was enjoying to watch.   So please enjoy this movie.