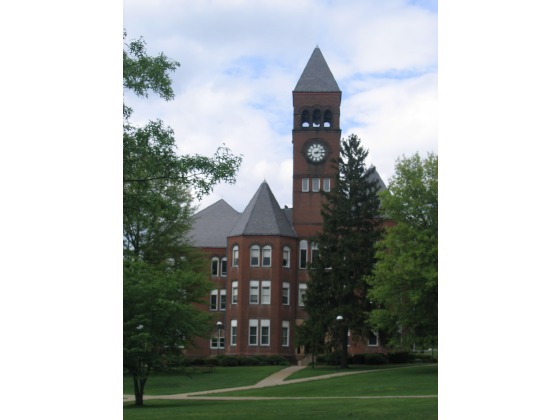 “School Spirits” ended it’s first ever six episodes during the summer months, the last episode of the season. Slippery Rock University is the bookend of the Michigan story. It’s a fraternity story, so it’s one of it’s scariest tale.  We hear from several members of the fraternity who believe they were haunted by the violent spirit of a man who, 150 years ago, was hanged not far from their frat house.

“The story revolves around us moving in an off-campus house that had signs of paranormal activity,” Hooven said. “We jokingly call the ghost ‘Ted’ and were OK with everything. Random sounds and large wooden paddles being thrown across the room were standard events.”

Hooven said fraternity brothers nicknamed the house “Thunderdome.” “Every night something odd would happen in the house,” he said. “Things would turn up missing; our wiring would short circuit; and footsteps could be heard on the third floor.”

Hooven said he was the only resident of the third floor, which included his bedroom, an old bathroom and a larger room the fraternity converted into its Chapter Room. This is where brothers hung fraternity paddles.

“Over the next few months, we became used to our paranormal roommate and even nicknamed him ‘Ted,’ apparently that was not a name he liked because things started getting more aggressive after that,” Hooven said. “The footsteps turned into heavy pacing, doors slamming, paddles being thrown off walls. You have to understand these paddles were solid oak and hung on a wall and a thick and long nail.”

Nine brothers held an Ouija board session in the chapter room. “We addressed ‘Ted’ and the board spelled out cryptic words: “Stab,” “Kill,” “Stab,” “God” and then “Bye,” Hooven said. “There were nine brothers participating, and when we asked how many people were in the room, it said ‘Nine.’”

As you may know the Ouija board, is never to play as a game. It is evil. If someone wants to speak to the dead, please don’t ever use it. Who ever is marketing the Ouija board should destroy in fire immediately! Apparently, teens and college student like to speak to the dead, to take a risk, but eventually it will affect them emotionally and posses the one whom we love. It’s a lesson to be learn, but the stories show how dangerous it is.

Most of the ghost legends at SRU focus on Miller Auditorium and North Hall and involve a reported apparition dubbed “Emma the Ghost.” “Emma” is thought by many to be a spirit embodying Emma Guffey Miller, a prominent political figure, SRU trustee and University supporter who died in 1950.

Over the years, SRU students have reported seeing a woman’s figure out of the corner of their eye, or hearing pounding noises from a cove, but finding nothing when they check on the disturbance. Other stories tell of lights flickering during rehearsals.

They speculate that Emma, described as friendly, haunts Miller because the building was named after her, and she loved theatre. Students use many of her old clothes as costumes and store them in “Emma’s Closet” inside Miller.

In 2009, SRU allowed Baelfire Paranormal Investigation to spend the night in Miller Auditorium searching for Emma. Owner John Lewis claimed his team captured pictures of primordial mists and electronic voice phenomena. He also said he felt pressure against his knee, and a K2 electromagnetic detector flashed on command, indicating the presence of spirits. Baelfire presented the University with a certificate officially designating Miller as being haunted.

If your school has a ghost tour on campus, apparently your school is haunted, take the ride and enjoy the history and get to know your campus.

So what’s in the store for SyFy “School Spirits” I hope it comes back for another season of spine tingling scary good true stories of university’s campus around the United States, but don’t let the ghost scare of a good education we need to succeed and make our dream come true.