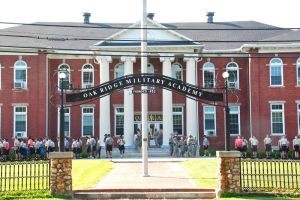 There was a report in oak ridge military academy in North Carolina, which was the site of a civil war battle.  They were many supernatural events at the academy. One of the places that was haunted was a room in cone dorm. Many people had experienced the ghost that lived in that room.  Some of the students would slide hangers under the door and they would all fly around and hit the door, then one day someone slid a bible under the door and the next day they found it outside under the window, in shreds. Nobody has had the nerve to entered this room.

Another ghost was the one who haunted the middle room in the girls dorm, there were severe temperature drops and one could see your breath, and when no one was in the room it sounded like someone was bouncing in the old spring beds, and one could hear giggles that sounded like little girls playing.